Purpose built as an industry-leading high performance recording system, TDT’s RZ5P Fiber Photometry Processor is the perfect system for real-time processing and simultaneous acquisition of photosensor recordings in several brain areas of a freely behaving subject or in multiple subjects.

Additionally, the RZ5P is a highly modular and flexible system which allows you to easily add other modalities such as electrophysiology, electrical cortical stimulation, and psychophysics.

What is Fiber Photometry?

Fiber Photometry is a method for measuring brain activity using calcium-sensitive fluorescent proteins. Due to its low cost and much simpler surgery and data analysis compared to electrophysiology, it is quickly becoming one of the most popular choices for measuring neural responses from behaving animals.

TDT is contributing to the growth of this novel method by providing hardware & software for fiber photometry experiments that can do it in half-a-dozen mouse clicks. 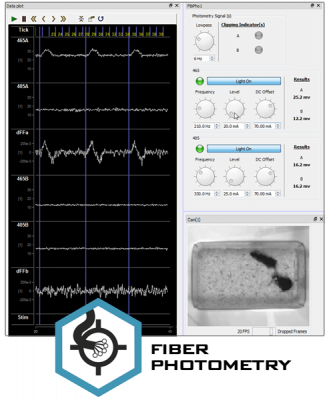